Introduction to Predictive Biometric Systems - Part 6: Analysis of a heat exhaustion event by a data scientist

If this is the first time you’re reading a Canaria Technologies blog, you’ll absolutely want to go back to Introduction to AI part 1 before reading this (unless you’re a data scientist). You can read it here

If you’ve made it this far! Well done! Here’s where you’ll be able to put your knowledge to the test. Below is a report from the Canaria Technologies data science team about the first heat exhaustion incident captured in the case study from the last article.

If you can make it to the end and have understood most of it, you can then say that you have a fluent conversational knowledge of AI. Hopefully you’ll now be able to read papers, attend AI conferences and understand a substantial amount of what’s been discussed. You’ll probably be able to catch out when someone is pretending to know what AI is as well! 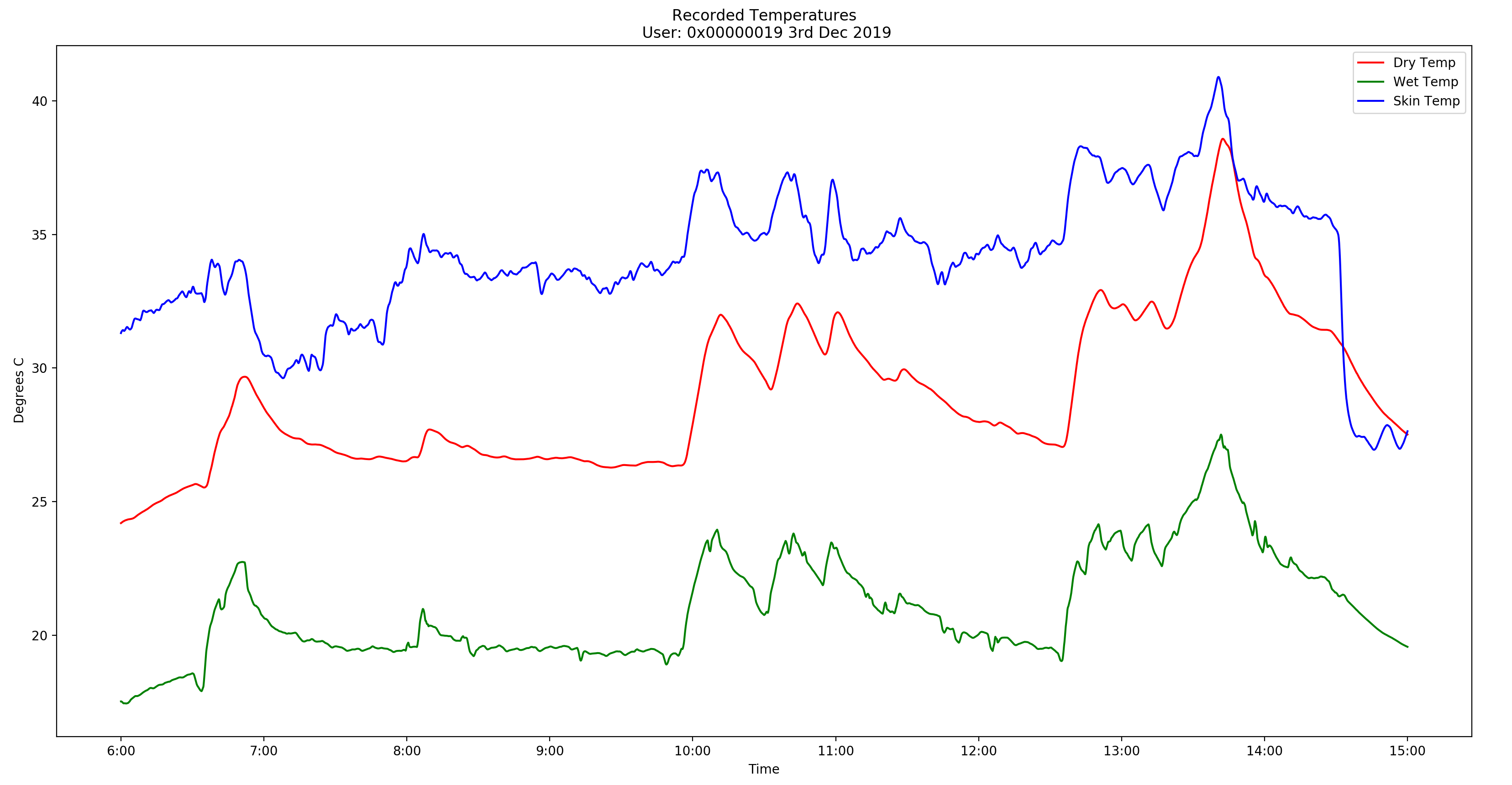 As can be seen by the recorded temperature data, the user did not enter an extreme heat stress zone (as designated by the NT Government), however between 1pm and 2pm there was a significant spike in all three of the recorded temperatures, with the user’s skin temperature exceeding 40oC. As stated before, we do not have any data to confirm the user was uncomfortable during this period, however it is safe to say that in an environment where Ambient and Skin temperatures are approaching/exceeding 40oC and the wet bulb temperature also rising, this is a situation where continued exposure has a high likelihood of resulting in a heat exhaustion event.

Now seeing a rise in temperature is one thing, but in reality anyone can do that with a digital thermometer and regular recording intervals. It is the other data recorded by the Canaria Technologies Puck v4.2 that gives the Canaria Technologies’ data science team the ability to produce predictive models which can produce real-time alerts.

No Real Change in Activity 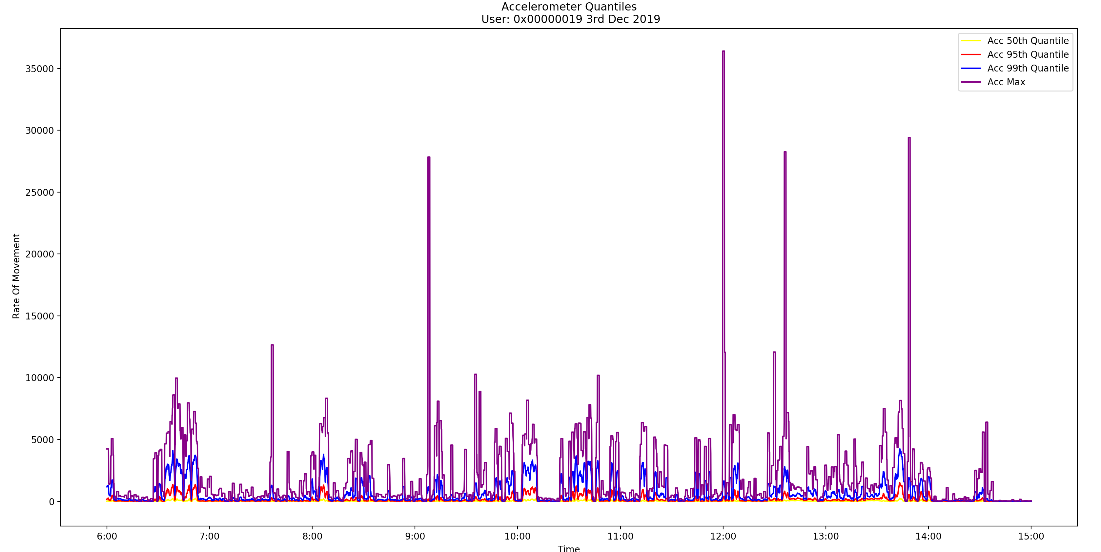 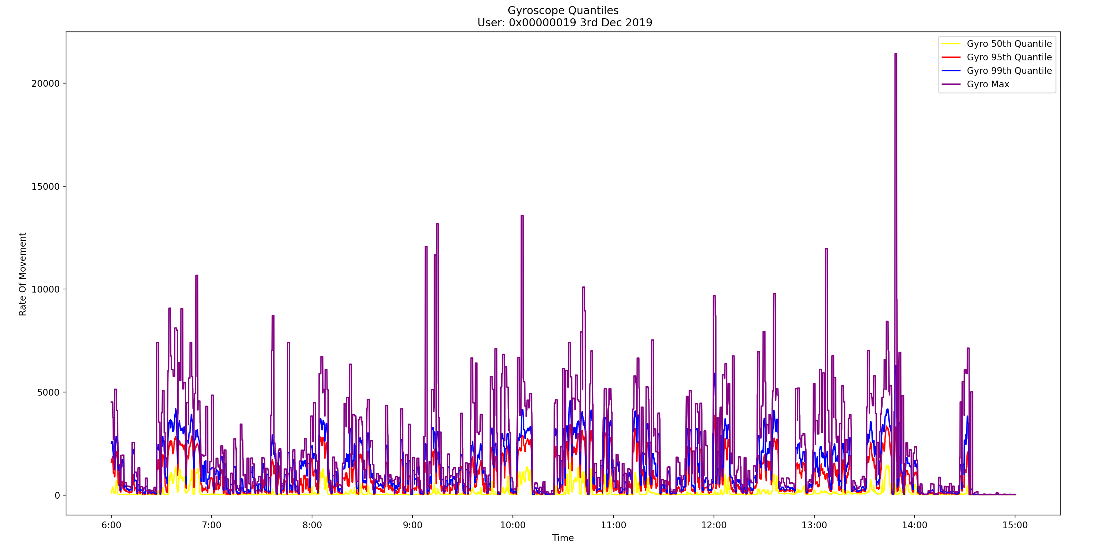 As shown by the Accelerometer and Gyroscope data, the user is consistently active throughout the day.

Although there are significant spikes at the time of exposure (which would indicate a level of distress), directly after the incident (post 2pm) the activity and movement recorded by the device slopes off to basically nothing. This would indicate that the user rested.

The temperature data on the previous page also slopes off directly after the exposure, which taken together would indicate that the user retreated to an indoor air-conditioned space.

As stated, although there was no heat stress or distress reported by the user, it is clear that they were experiencing symptoms. Following are charts showing a selection of the features calculated by the Canaria Technologies Data Science team using the raw data collected by the Puck v4.2. The algorithms behind these calculations aid significantly in producing predictive models based on the data recorded. 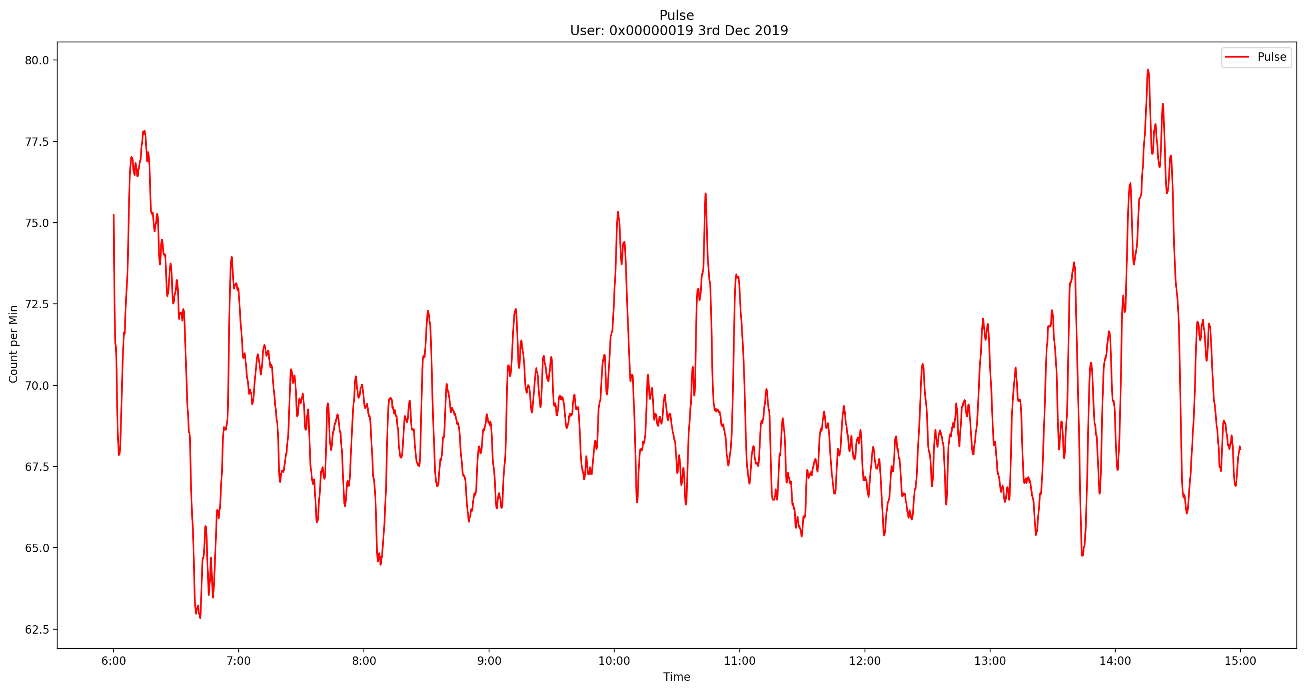 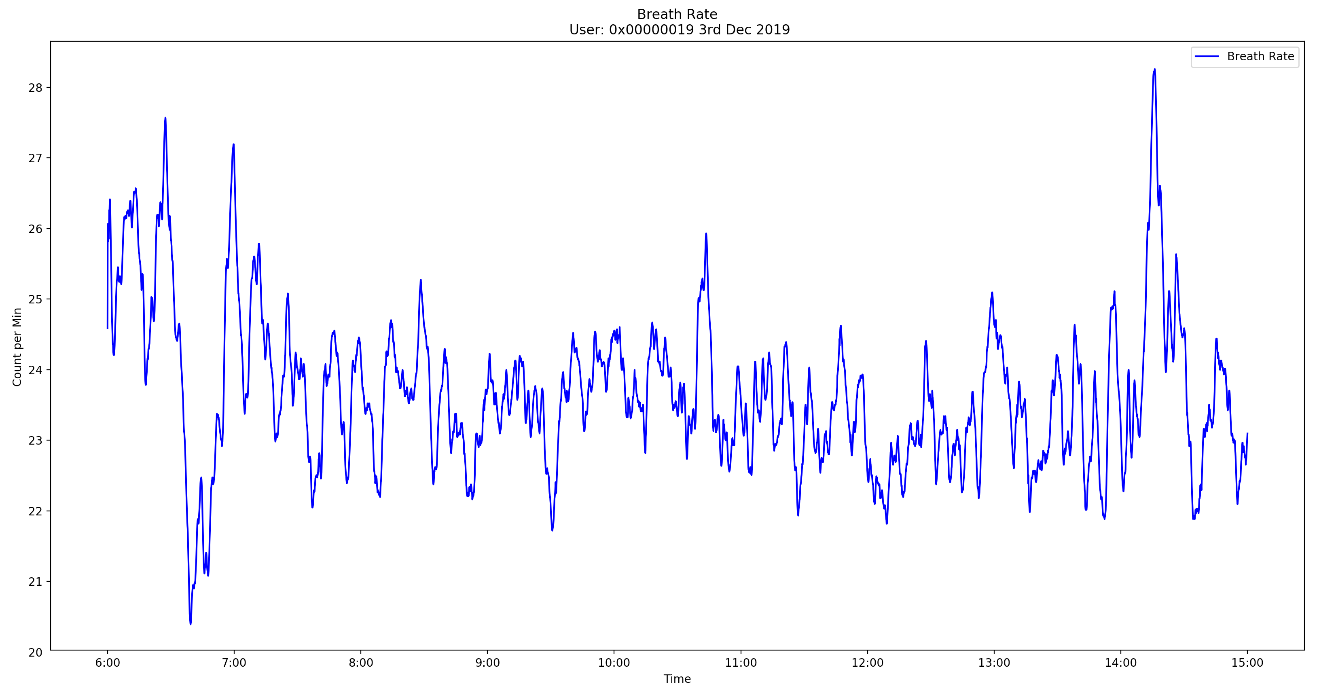 During the period when the user was exposed to elevated temperatures, their pulse and breathing rate began to increase, maxing out for the day just after 2pm. Elevations in these simple vital signs form a baseline indicator for Canaria Technologies’ predictive capabilities, confirming observations made in other recorded data.

The algorithms Canaria Technologies use based on the Pulse Plethysmography (PPG) data show significant movements at the time of the heat exposure.

Had the user not taken the preventative steps of removing themselves from the high temperature environment, these PPG movements would most likely have continued. 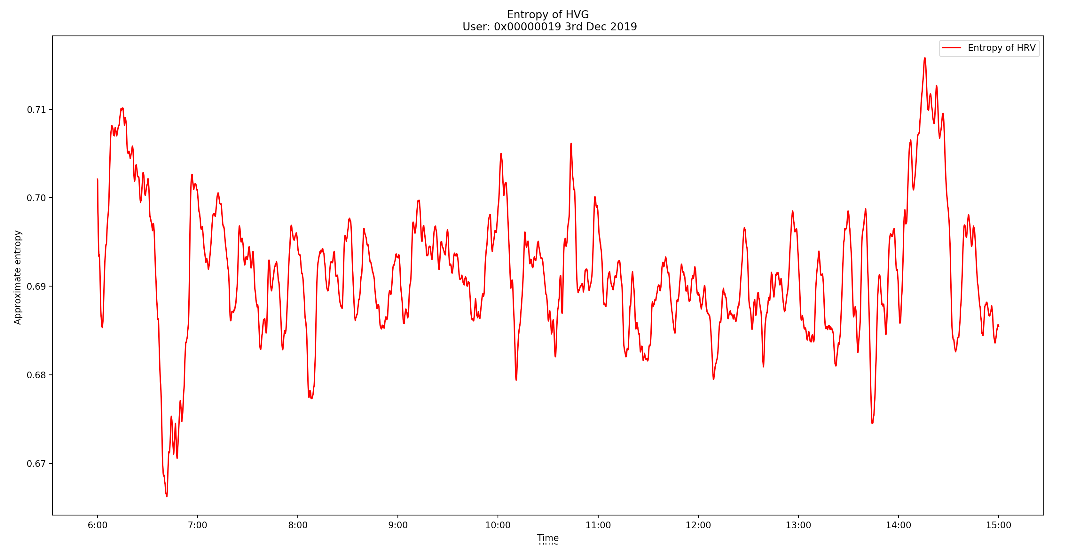 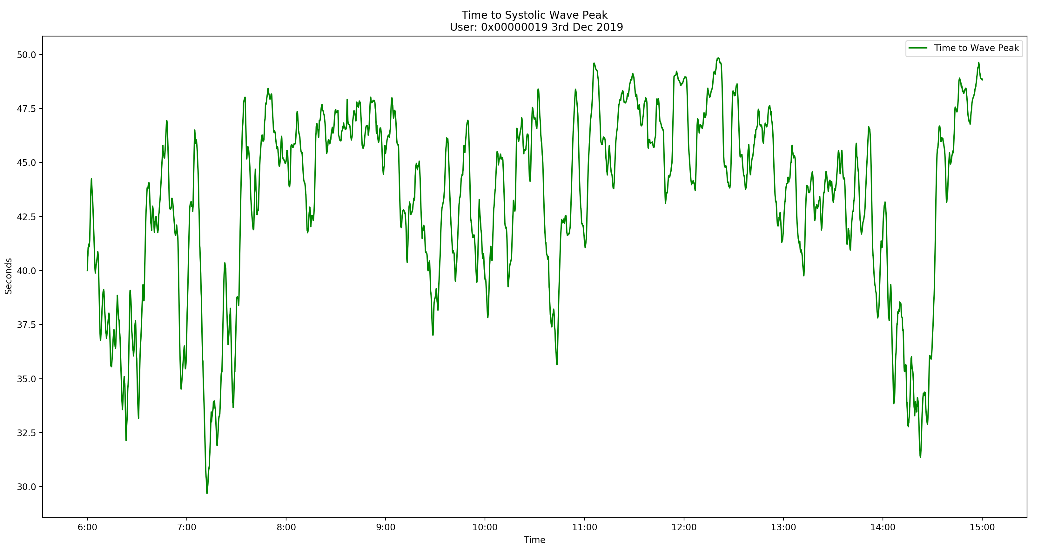 It is important to note the band in which the Entropy of HGV (Hierarchical Geometry Verification) and Systolic Wave Peak charts travel in during most of the day. Also, that any other significant movements happen sharply, whereas around the time of the heat exposure (2pm), there is more of a gradual movement in a direction. This behaviour in the data prior to an elevated heat situation helps Canaria Technologies predictive models substantially as it is ‘different’ behaviour than other variable movement.

Varying behaviour is also seen in the Inter-Beat Interval (IBI) chart. Although there is a lot of ‘noise’ in the IBI signals, the data oscillates rapidly throughout the day. However, at the time of heat exposure, there is a distinct trough which is not seen anywhere else during the day. This reduction in the band of oscillation is clearly detectable by both an Artificial Intelligence Machine Learning Model (self-learning predictive biometric system), as well as a Thresholds based Predictive Model (set value predictive biometric system).

The effective usefulness of a predictive model, is really based around how early it can predict the occurrence of an event. The previous charts illustrate that the user is progressing towards a heat stress event, however the user would have been exposed to an environment of elevated temperatures for the better part of half an hour before this data began to give the Canaria Technologies predictive models an indication. As can be seen by the charts below, the Canaria Technologies Puck v4.2 also records data which can give an ‘early warning signal’ for the predictive models to look at the significance of the other data coming through. 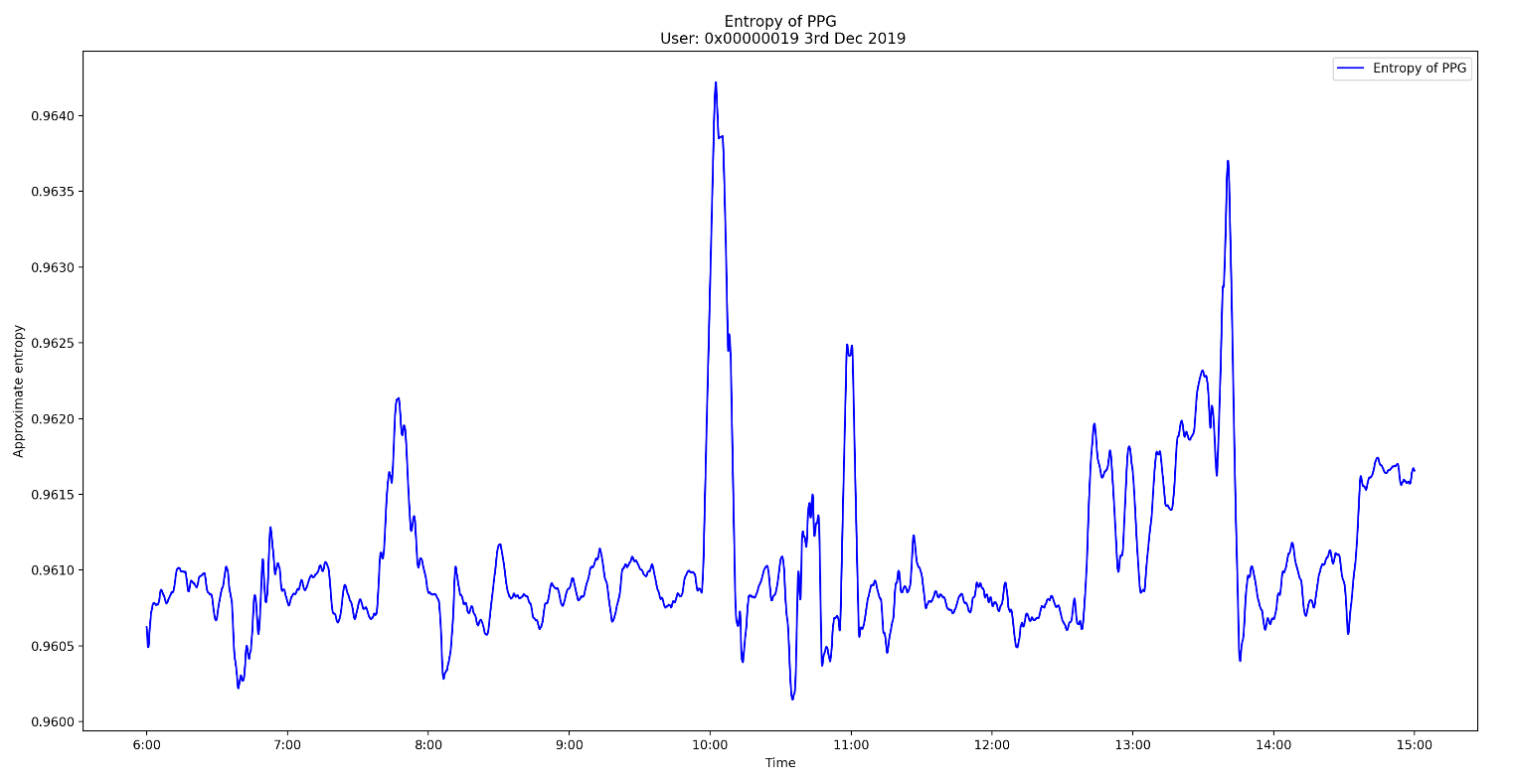 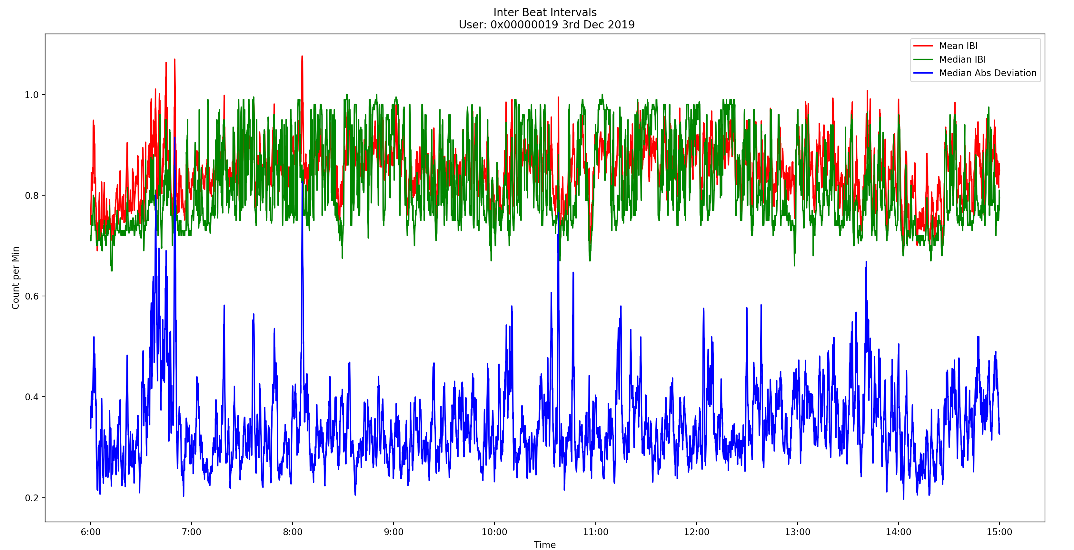 Clearly illustrated from the Entropy of PPG algorithm, the PPG data recorded by the device is becoming gradually more unpredictable from 1pm till the peak of the heat exposure. Although there are spikes of unpredictability in other parts of the day, they are definite spikes, quickly returning to a normal operating band. The period leading into the user needing to return to an air-conditioned space, there is a clear elevation over time in the level of unpredictability. 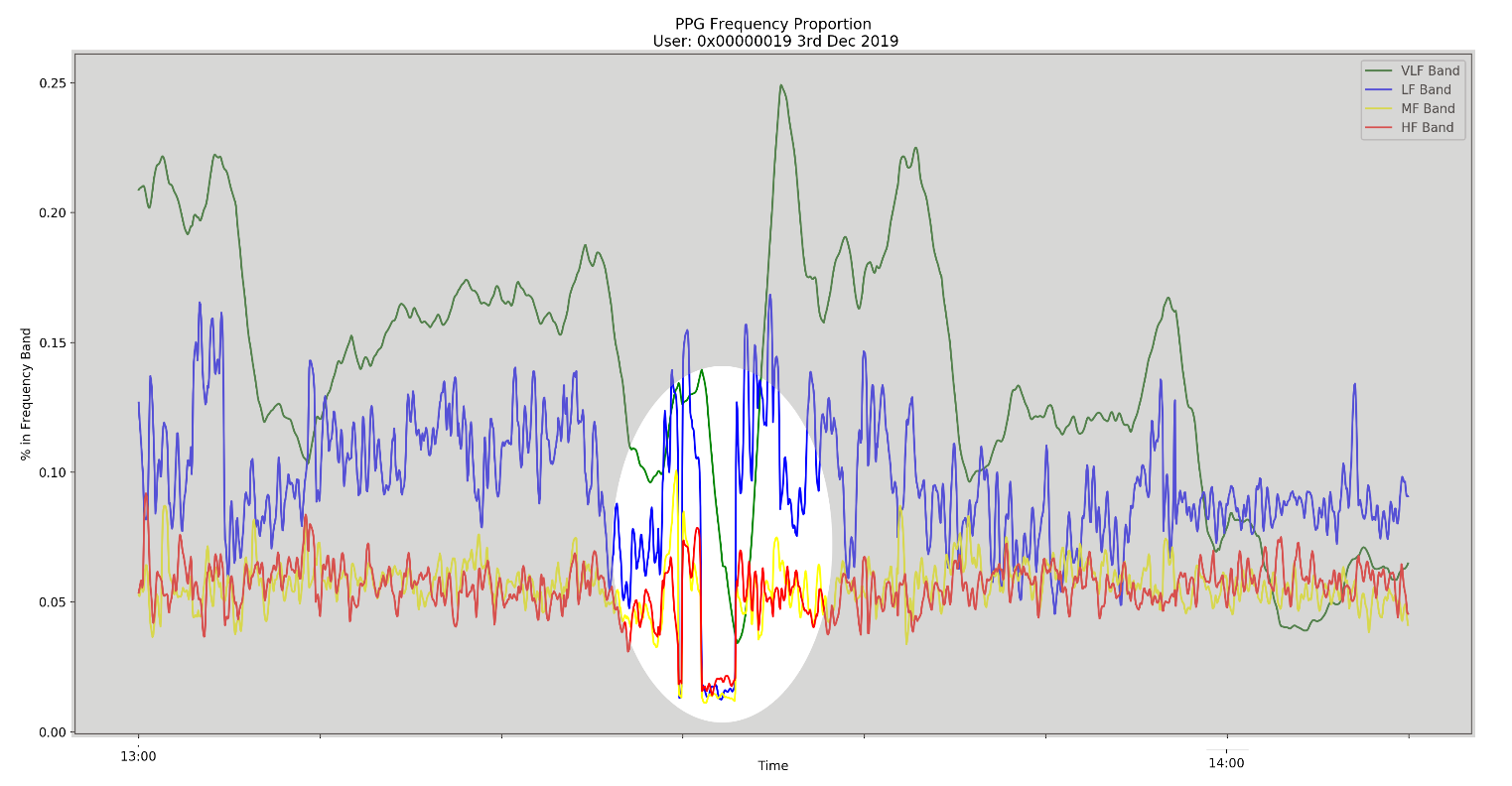 This chart shows the percentage of the PPG signal which is in each frequency band. Although it is noisy, the behaviour highlighted in the circle is of genuine interest to a predictive model. It doesn’t happen anywhere else throughout the day, but just prior to all of the user’s other biometric data indicating distress there are absolute extreme lows directly followed by absolute extreme highs for each frequency. 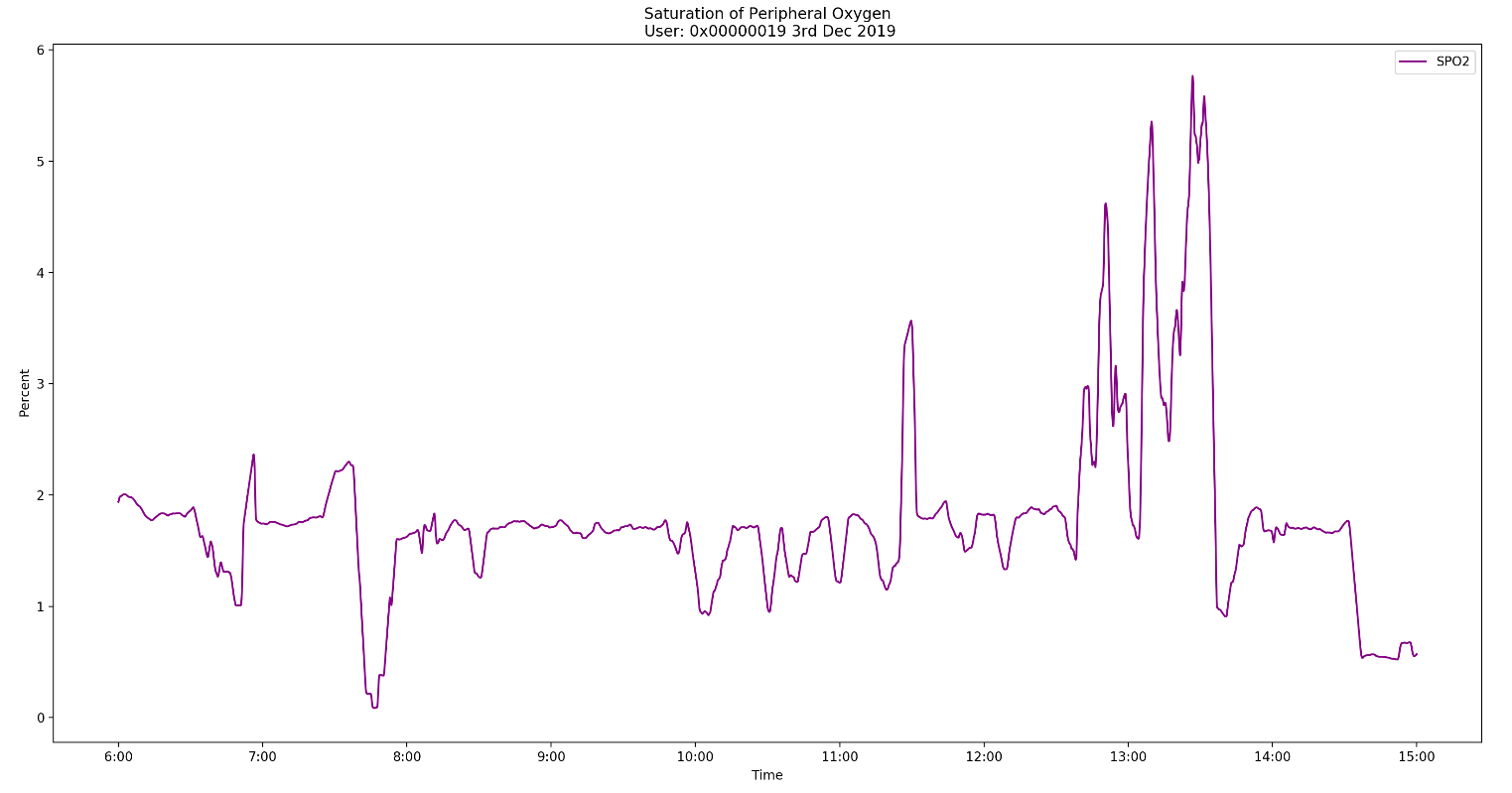 Similarly, in the chart below for Saturation of Peripheral Oxygen. The period prior to and during the extreme heat exposure shows the only real activity for the entire day. This type of variability assists predictive models extremely well.

Although the ability for the Puck v4.2 to clearly predict a Heat Stress Event has not yet been proven in real time, the data produced by the device thus far, along with the real-time analysis algorithms, clearly identifies changes in the user’s biometric data. These changes are what a predictive model uses to produce a result.

The data shown in this analysis has been selected so that the changes can be visually identified, however the micro-computer incorporated within the v4.2 device has the processing ability to identify these changes much sooner. Over the next couple of months as the predictive models are built out, this on-board processing ability will enable Canaria Technologies to provide a user with earlier and earlier alerts based on both individual threshold focused predictive models as well as AI based models which are generalised across all the data we have available.